Jordan Hardin is the sort of person who reminds you what true authenticity feels like. He’s present and grounded, genuinely interested in just about everything, and delightfully prone to whimsy. His honesty and openness calls upon those around him to show up authentically in return, which makes him really great to be around and a needed presence in the world. 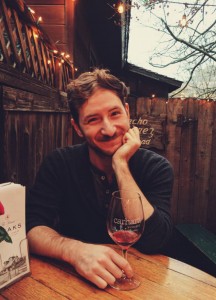 Jordan serves as Food and Beverage Director for Alfred Inc. which includes Alfred Tea Room and multiple locations of Alfred Coffee in Los Angeles. Here his creativity and passion for gustatory delights gets to shine.

If you’ve been a reader of mine for some time, you may know him from the beautiful interview he and Nick Westbrook gave on male friendship. He also generously donated the use of his voice for one of my guided mindfulness meditation recordings. He’s just an awfully swell creature, so I keep wanting more people to know him, and I’m quite honored that he agreed to be part of this interview series.

I would say balance. The forces of masculine and feminine need harmony in order to mean anything at all. Masculinity is sacred because of its relationship with the feminine. It’s not all-encompassing being, but a persuasion, based on inherited and learned traits. If that persuasion isn’t balanced but rather forced into a feedback loop, then masculinity becomes toxic. The sacred is reserved for the eternal and for all intents and purposes, the shared experience of being a man (or a woman) is that sacredness.

My grandfather, to be sure. If I had to point to a person who taught me what it meant to be a man, with male characteristics from an older time, while at the same time respecting, protecting, and working together with women, it was him. He was masculine in the way you might think a farmer is (which I actually find humorous since farming tended to be seen as a feminine spirit in ancient times), somebody who worked for a living and expected everyone around him to do the same, my grandmother, mother, and me included. He was also a gentleman and taught me how I should treat women, that is, with kindness, gentleness, and love. He has an anecdote or wise phrase for everything, like, “Jordan, if you raise your voice in an argument, then you’ve already lost it,” and, “Jordan, I never hit nobody who didn’t deserve to be hit. But you never hit a woman. Not in the least because some of them hit back.” He was not without his flaws (who is?), but he also never talked down or around his spouse. They complimented each other. He had two daughters and from what I can tell, he treated them as he would’ve anyone, teaching them self-respect and self-reliance, something that was passed on to me in whatever ways it could be.

Shared experience, conversation, and equal duties and roles. If a boy lives with, works with, and communicates with girls and women on an equal level, then I have no doubt he will see them as equals, even if he’s told not to. To help with this, we need more female voices to be heard, to be channeled into men’s brains so that empathy and compassion have no course but to spring to life within. Through media, through the workplace, through the close relationships men have. And I believe men need to talk a hard look at themselves and contemplate the reasons they act the way they do. Why do they get angry? Why do they become sexually aroused? Why do they feel the need to dominate situations, or not? The answer inevitably connects to what they think it is to be a man and when they can identify that, they can try to balance it with the conceptual experience of women (supported by the female voices they will have hopefully heard).

The answer for me is that the masculine is a trait of strength and the feminine the trait of protection. What gets extremely problematic in regards to the dynamic between the masculine and feminine is when a culture starts pretending the roles are more separate than they are. There is a great deal of cohesion between masculine and feminine spheres, but for reasons far too complex to get into, they’ve historically been relegated to separate spheres. I’m not arguing that they are entirely the same, of course, but that the shared experience is much more similar. Much more similar than yin and yang might suggest. Balance is the key. Both masculine and feminine are capable of completing the journey, whatever it may be, but sometimes one is needed more than the other. All humans embody both traits, and they should embrace that.

I’d say that typically, true strength comes directly from vulnerability. To be vulnerable is to be open to attack. Not allowing those attacks to destroy you is an element of strength. Strength isn’t beating opposing ideas into submission, it’s allowing ideas to be torn apart and to try and understand why they were torn apart, and to keep thinking. Strength isn’t taking everything on yourself, it’s realizing that the group has more strength than the individual and asking for help. And strength isn’t being emotionless, it’s learning to understand and deal with your emotions so that you can live a good and productive life.

I’ve been told this many many times in my life. Mostly by men (occasionally by women) and mostly as a call to reject my emotions, which I feel is counterproductive. This is typically a reprimand, but I’d reinterpret it to be an empowering statement. This could only work if the idea of manhood is redefined, but I’d love to see it as a course of action that drives men to be strong but in a supportive way, and to be emotional but in a thoughtful way. To be resilient and resourceful while also acknowledging you don’t know everything. I could easily see this being an inspirational statement to many young boys, rather than an excuse to make them stop crying.

That being masculine means that you aren’t emotional, scared, or vulnerable. We have to remember our common traits of humanity and see masculinity as a shade of those traits, rather than a cover.

Wow! What a question… I’ve had to think about this question much longer than the others and come back to it. I think it’s almost easier to say what I dislike most about being a man. I mean, many of the things that have made my life much easier, as the result of being a man, come at great personal cost to others, so I don’t feel right saying that I like those things. But I’d rather be positive here, and this probably isn’t the answer you’re looking for and I’m sorry for that, but I’d have to say the fact that I can gain muscle and loose fat very quickly. I mean, this is just pure genetics, but it’s a benefit!

I believe that masculinity needs to have balance, and will be forced to reckon with that. However, I also think that culture cannot control instinct 100%, and the instinct for aggression and dominance will never be stamped out (down a rabbit hole here, but perhaps they shouldn’t be either?). For what we can make of it, masculinity will evolve in equanimity with femininity and hopefully that balance will come for the majority of peoples.